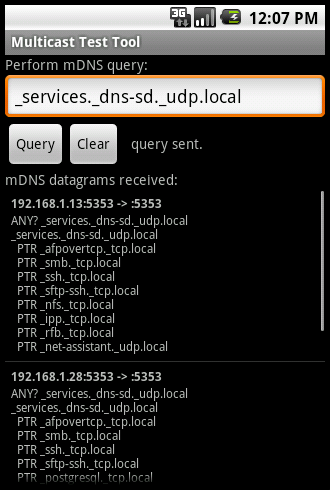 In my previous post, I mentioned my frustration that certain Android phones (including my HTC EVO) cannot receive multicast datagrams. I'd like to get feedback from my friends and colleagues about multicast support on their phones, so I wrote a simple app for testing multicast.

The Multicast Test Tool continually monitors the network for Multicast DNS (mDNS) packets while the app is running in the foreground, and presents the contents of these packets to the user. The app also allows the user to perform simple mDNS queries on the local network. If you run the app and touch the "Query" button, it will query for the default _services._dns-sd._udp.local name, which will solicit mDNS responses from devices on your network that advertise services via mDNS.

Mac and Linux machines will respond to this discovery query. Windows machines will also respond if you are running iTunes and have checked "Share my library on my local network" in the preferences. If you think your network may not have any of these devices which support mDNS service discovery, you can run the attached perl script to transmit a gratuitous mDNS packet.

You can also query specific hosts using the format <hostname>.local. My home network is always buzzing with mDNS traffic, so on my multicast-capable virtual machine I see lots of activity without performing any queries.

If you see any activity at all, it means that your phone supports multicast. If you see no activity, then your phone likely does not support multicast.