It's easy to imagine that computing sprang into existence with the advent of home computers in the late 1970's and 1980's, just as many people have the perception that the Internet sprang into existence in the mid- to late-1990's. In both cases, these technologies crossed thresholds that made them accessible to general consumers, leading to greatly increased usage that makes their pre-consumer existences seem quite meager. However, in the early days great minds were hard at work on developing revolutionary ideas that are so ingrained in computing today that they are largely taken for granted.

I've gained a much better appreciation for this pre-PC era of computing after recently reading The Dream Machine: J.C.R. Licklider and the Revolution That Made Computing Personal, written by M. Mitchell Waldrop and published in 2002. While ostensibly a biography of J.C.R. Licklider, it actually devotes more text to covering the contributions of many other pioneers, including Norbert Wiener, Vannevar Bush, Claude Shannon, Alan Turing, John von Neumann, John McCarthy, Douglas Engelbart, Bob Taylor, and Alan Kay. Licklider's life and career provide the book with a convenient backbone since he crossed paths with so many other notable figures, and also because of the book's focus on how these people helped bring about Licklider's vision of interactive computing as a means of boosting human productivity.

I can definitely recommend this book to anyone interested in the history of computing, as it clearly conveys how our modern world of computing didn't arrive overnight but rather is the result of a long continuum of ideas from throughout the 20th century. In the words of the author:

I finally began to realize that windows, icons, mice, word processors, spreadsheets, and all the other things that seem so important to the modern software industry actually come at the end of the story, not at the beginning.

In this post, I'll share some notable highlights from this history that seemed to fall into a few common themes that I found interesting. 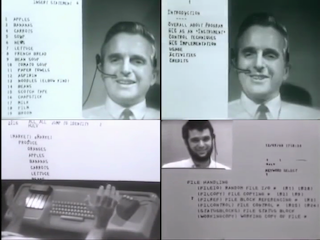 Douglas Engelbart delivers what was later known as The Mother of All Demos in 1968.

Some of the pioneers of computing were so far ahead of their time, that they almost seem like time travelers from the future.

Reading the chapters that covered the 1930's and 1940's, I was struck at how much progress was put on hold as World War II threw a colossal non-maskable interrupt at the scientists working on the foundations of computing. Industry and academia shifted gears to support the war effort, and individual innovators put their computing projects aside while they lent their skills to facing the imminent threats. The author concludes that the war ultimately forged the pieces of computer theory "into a unified whole". (Ibid. p. 40) Nonetheless, the book contains a number of examples where critical ideas were put on ice for the duration of the war, such as:

An interesting counterpoint is John von Neumann's career. The war led him to join the Manhattan Project, where his experience with performing large-scale calculations on mechanical tabulators led him to develop his ideas about electronic computing, ultimately leading to his famous von Neumann architecture.

The things we take for granted

Many ideas that seem obvious to us today were actually not obvious at all, but rather had to be invented. Some examples include: