As a learning exercise to sharpen my Rust programming skills, I recently toyed with writing a small program that uses a terminal-based user interface which I built using the Cursive crate developed by Alexandre Bury. Cursive provides a high-level framework for building event-driven terminal applications using visual components such as menu bars, text areas, lists, dialog boxes, etc. Conceptually, developing with Cursive is one level of abstraction higher than using a library such as ncurses, which provides a more raw interface to managing screen contents and translating updates to the terminal's native language. In fact, Cursive defaults to using ncurses as one of several possible backends, and allows setting themes to customize various text colors and styles.

In today's software world, no one writes terminal applications expecting them to be a hit with the masses. Graphical applications (e.g. desktop apps or web apps) provide a uniquely intuitive interface model that allows users to quickly become productive with a minimal learning curve, offer a high-bandwidth flow of information to the user, and remain the only reasonable solution for many problem categories. Many applications would simply not be possible or practical without a GUI. However, terminal programs can find a niche audience in technical users such as software developers and system administrators who are often in need of utilities that are a bit more two-dimensional than the command line's standard input and output, but retain the flexibility to be easily used remotely or on devices of limited capability.

Also, terminal apps are often extremely fast — fast enough to maintain the illusion of the computer being an extension of the mind. I find it frustrating that in 2017 I still spend plenty of time waiting for the computer to do something. Occasionally even typing into a text field in a web browser is laggy on my high-end late-model iMac. For every extra cycle the hardware engineers give us, we software engineers figure out some way to soak it up.

The terminal is not for everyone, but lately I've found it's the one environment that is instantaneous enough that my flow is not thrown off. For kicks, I recently installed XUbuntu on a $150 ARM Chromebook with the idea of mostly just using the terminal (and having a throwaway laptop that I'm not scared to use on the bus/train). I expected to mostly be using it as a dumb terminal to ssh into servers, but to my surprise, it has actually proven to be very capable at performing a wide range of local tasks in the terminal with good performance.

Anyone who has developed software with a GUI toolkit (e.g. Windows, GTK+, Java Swing, Cocoa, etc.) will find most Cursive concepts to be very familiar. Visual components are called "views" (some toolkits use use the terms "widget" or "control" for the same concept), and are installed into a tree which is traversed when rendering. Some views may contain child views and are used for layout (e.g. BoxView and LinearLayout), while others are used as leaf nodes that provide information or interact with the user (e.g. Button, EditView, TextView, SliderView, etc.). Cursive can maintain multiple view trees as "screens" which can be switched between. Each screen's view tree has a StackView as the root element, whose children are subtree "layers" that can be pushed and popped. 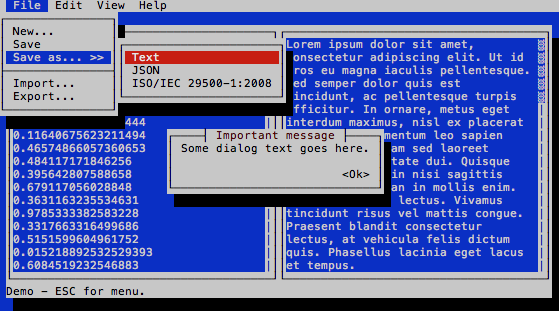 Cursive provides an event model where the main program invokes Cursive::run() and the Cursive event loop will render views and dispatch to registered callbacks (typically Rust closures) as needed until Cursive::quit() is called, at which time the event loop exits. Alternately, the main program may choose to exercise more control by calling Cursive::step() as needed to perform a single iteration of input processing, event dispatch, and view rendering. Key events are processed by whichever input view currently has focus, and the user may cycle focus using the tab key.

Cursive diverges from other UI toolkits with respect to referencing views. In many environments, we would simply store references or pointers to any views that we need to reference later, in addition to whatever references are needed internally by the view tree to form the parent-child relationships. However, Rust's strict ownership model requires us to be very explicit about how we allow multiple references to the same memory.

After the main program instantiates and configures a view object, it generally adds it to the view tree by making it the child of an existing view (e.g. LinearLayout::add_child()) or adding it to a screen's StackView as a layer. Rust ownership of the object is moved at that time, and it is no longer directly accessible to the main program.

To access specific views after they have been integrated into a view tree, views may be wrapped in an IdView via .with_id(&str) which allows them to be referenced later using the provided string identifier. A borrowed mutable reference to the wrapped view may be retrieved with Cursive::find_id() or a closure operating on the view may be invoked with Cursive::call_on_id(). Under the hood, these methods provide interior mutability by making use of RefCell and its runtime borrow checking to provide the caller with a borrowed mutable reference.

The following code demonstrates how views can be referenced by providing a callback which copies text from one view to the other:

Early in my exploration of Cursive, this method of accessing views proved to be somewhat challenging since fetching references to two views in the same lexical scope would result in BorrowMutError panics, since the internals of the second find_id() would try to mutably borrow a reference to the first view while traversing the tree. Cursive's view lookup code has since been adjusted so that this is no longer an issue.

While developing a full application, I quickly ran into BorrowMutError panics again. With application logic tied to my custom view implementations, and some such code needing to call methods on other custom views, inevitably some code would need to mutably borrow a view that was already borrowed somewhere further up the stack.

My solution was to completely decouple UI concerns from the application logic, resulting in something along the lines of the well-known Model-View-Controller (MVC) design pattern. A Ui struct encapsulates all Cursive operations, and a Controller struct contains all application logic. Each struct contains a message queue which allows one to receive messages sent by the other. These messages are simple enums whose variants may contain associated data specific to the message type.

Instead of calling Cursive::run(), the controller will provide its own main loop where each iteration will operate as follows:

This scheme worked great for my needs where it's okay for the program to completely block while waiting for user input.

For the message queue, I used Rust's std::sync::mpsc (multi-producer, single consumer FIFO queue), which provides a convenient way for different code components to own a cloned Sender object which inserts elements into a shared queue. The use of mpsc is really overkill for the single-threaded applications I was working with, since any thread synchronization work being performed is wasted.

Here's an example of adapting the above text copy program to such an MVC model. It's admittedly much lengthier.

As a learning exercise, I wrote a Cursive-based interface to UPM password manager databases. However, nobody should use it for reasons outlined in its README.