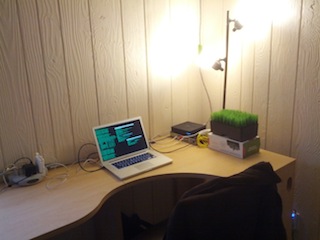 While finishing up my holiday travel, I decided to stop in for a couple of days at the Kansas City Hacker House, a place for aspiring technology entrepreneurs to live and work on their projects while connected to the Google Fiber gigabit network. Unlike my previous Google Fiber experience, I had an opportunity to plug my laptop directly into the network via gigabit ethernet and run some more tests.

It looks like Google Drive wasn't having a good day. Dropbox, on the other hand, really screamed. (Although not as much as you might expect on a gigabit connection.) It was nice to be able to download Ubuntu in 61 seconds from a well-connected server. Bittorrent didn't perform well, though -- I suspect you'd need to be downloading a much larger file from many more seeds before you'd see Bittorrent have time to ramp up the connections and compare favorably.

All tests were performed to and from a local ramdisk, to avoid any hard drive I/O bottlenecks. However, the remote servers are likely using spinning disks that are contending with many other users.

The Speedtest.net tests really aren't very useful for Google Fiber, since the servers aren't really set up for measuring high-bandwidth connections. You really end up measuring the server's capabilities and the throughput of various intermediate networks. Nevertheless, here are a couple of tests:

I tested with several other Speedtest.net servers, and all the results varied too much to be useful.

To provide users with a reliable way of measuring the bandwidth to their home, Google provides a Google Fiber Speed Test for testing the connection from the home to a server on the Google Fiber network. (Google Fiber customers can access the server, but it doesn't appear to be accessible from the outside.)

The primary differences between Google's speed tests and the other speed tests seem to be:

Google Fiber has considerably increased their peering arrangements since my last visit. They seem to have good peering with the following networks that I noticed:

(Who knew that Facebook even had their own nationwide network? If you see tfbnw.net addresses in your traceroutes, the tfbnw stands for "the facebook network".)

IPv6 seems to be functioning properly, according to various online testers. (I did have some issues reaching my 6to4-connected home network via IPv6, for some reason.)

The file transfer tests -- old-fashioned "move this big file from one hard drive on the network to some other hard drive" -- are probably not the best tests of a next-generation gigabit service such as Google Fiber. Nor are most other "download" applications. (What's the point of being able to download four seasons of Breaking Bad in 3 minutes, when it takes 30 hours to watch?) Ultimately, unlocking the true potential of home gigabit connections will rely on the development of new and interesting applications. I predict a lot of live media, immersive telepresence, and rich collaboration applications will arise from this experiment.

Thanks to Ben Barreth and the residents of the Hacker House for having me over!