An on-screen trackpad and keyboard allow a computer to be remote controlled. 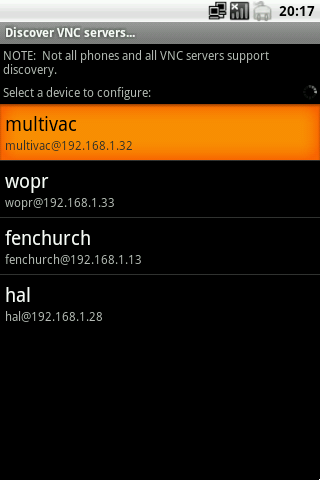 In my spare cycles recently, I've been tinkering with developing Android code to control home theater components. As someone who has been passionately involved with the consumer electronics industry over the past ten years, my personal home theater system includes quite a collection of disparate devices that defy even the most feature-rich universal remote controls. What the world needs is an open, extensible Android remote control application that can be rapidly updated to support new devices as they are released.

The first module of code I've developed is a remote control for home theater computers, such as the one I use to watch YouTube videos and other web video content. I've built a standalone app with this code for testing purposes. There are plenty of other such apps on the Android Market, but my program, Valence, seeks to provide a simpler experience in the following ways:

Today I'm releasing an unpolished "rough draft" of Valence so my friends and colleagues can test its compatibility with their networks. Some known bugs remain in this version, but I'm erring on the side of getting feedback early. Eventually, I'll roll the Valence functionality into my larger remote control framework that provides many more features such as controlling IR devices.

To use Valence, make sure you have VNC server software installed on your computer, and configured to allow connections:

I've uploaded a new beta package, which is linked below. Changes include the following:

Yet another beta release. Changes include the following:

I've made a beta release of Valence available on the Android Market. There have been no significant changes since the previous release, other than removing a bit of debug logging.

I posted a new release to the Market with an important bug fix, and a few minor changes: